The Longest Hatred is not Antisemitism but Anti-Gentilism

200 members of the Melbourne community have attended a panel discussion on – “Is Anti-Zionism Anti-Semitism?” 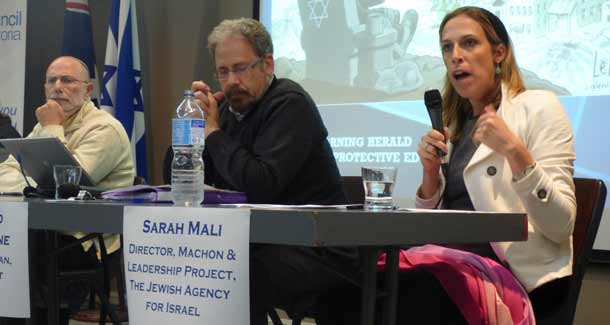 The panel hosted by the Zionist Council of Victoria and the Zionist Federation of Australia was made up of international experts, Dr David Bernstein (Dean of Pardes Institute, Jerusalem), Dr David Breakstone (Deputy Chairman, World Zionist Organisation) and Sarah Mali (Director of Machon and Leadership Project at Jewish Agency for Israel). Moderated by Zionist Council of Victoria board member, Liora Miller, the evening attempted to put context and understanding around the age old question.

Dr Breakstone, in his opening comments said that the rise of anti-Semitism and anti-Zionism is perhaps our own fault as we call Israel the nation of Jews, therefore we as Jews are seen as responsible for everything Israel does and are held accountable as such.

Dr Bernstein said that anti Zionism is politically correct way of describing the world’s oldest hatred and that it was very difficult to differentiate between anti-Zionism and anti-Semitism.

Sarah Mali’s expanded on the concept of anti -Zionism as the new vehicle for anti-Semitism, likening anti-Zionism to a mutation of a larger virus called anti-Semitism. She stressed the importance of distinguishing between legitimate criticism of Israel and blatant anti-Semitism, citing the 3D test as a useful resource. She explained how demonization, double standards and delegitimisation are all factors used in arguments about Israel that are in fact not simply anti-Zionist, but anti-Semitic.

“The first D is double standards – when criticism of Israel is applied selectively; when Israel is singled out by the UN for human rights abuses while the behaviour of known and major abusers such as Syria is ignored – this is anti-Semitism.”

“Demonization – this is when the Jewish state is being demonized – when Israel’s actions are blown out of all sensible proportional when comparisons are made between Israelis and Nazis, and between Palestinian refugee camps and Auschwitz – this is anti-Semitism, not legitimate criticism of Israel.”

“The third D is the test of deligitimisation – when Israel’s fundamental right to exist is denied – alone among all the people in the world – this too is anti-Semitism.”

Dr Bernstein reminded the audience that anti-Zionism in itself is not necessarily anti-Semitic, and that there were key differences between being actively anti-Zionist and being a passive non-Zionist. He also felt it was appropriate to discuss the context of the younger generation of Jews living in the globalised Diaspora and not truly understanding what the importance and significance of the land of Israel is to the Jewish people

The discussion was open to the floor and community engagement was encouraged. One of the key issues raised by the community was that of disaffected or disengaged Jewish youth, and the propensity of younger people to consider “Jewish” and “Israel” as separate entities.

Sarah Mali discussed some of the challenges the Jewish community faces in not only re-engaging those youth with Israel, but also in reinventing the ties between Judaism the religion and Israel the spiritual home of that religion to make Zionism an integral and central aspect of the Jewish identity once again.”