German Left Haunted by the Holocaust — Split Over Israel

Learning so intensively about the horrors committed by Germans left her feeling shame and guilt, Meyer said. But that same education communicated something else:

“There is Israel, and that’s the solution,” Meyer said, describing the role that was assigned to the Jewish state in her education. “That’s the salvation. It makes you feel better. All the shame and guilt is not that bad, because there is Israel and everything is fine now. And whatever Israel wants — give it to them. And whatever a Jewish person wants — don’t ask, just give it. That’s what I learned about it.”

Today, Meyer has turned against this perspective after encountering disturbing information about Israel’s occupation of Palestinian lands. And that has put her on one side of a deeply and — for Western Europe — uniquely divided left on the question of Israel.

On the other side stand German leftists such as Alex Feuerherdt, a freelance journalist and author based in Cologne, who stopped taking part in events held by anti-fascist groups because people there “express themselves in a rather anti-Semitic way when it comes to discussions about Israel.”

The internal conflict enveloping them and others on Germany’s still influential left is particular to this country. The legacy of Nazism leaves many leftists feeling pulled between their historic support for Israel in response to the Holocaust and the opposition to the military occupation of other peoples that is woven into the very warp and weft of the German left due largely to this very same legacy.

The schism is one that Israel itself views as more than an internal partisan matter. Even as Germany’s conservative Christian Democratic government reaffirms its historic commitment to a special relationship with Israel, public opinion polls show that 62% of Germans overall view Israel negatively. A 2012 survey by the German magazine Stern found that 59% of Germans described Israel as “aggressive.” Seventy percent agreed that Israel pursues its interests without consideration for other nations.

As Jerusalem and Berlin commemorate the 50th anniversary this year of the establishment of diplomatic relations between Israel and what was then West Germany, Israel’s Foreign Ministry is allocating $1 million for a series of events celebrating the milestone in an effort to shore up its image.

It is uncertain what impact this will have on the debate now embroiling the left. Meyer, a 37-year-old Berlin social worker, said her perception of Israel started to change when she attended an exhibition in Berlin of Breaking the Silence — a nongovernmental organization made up of Israeli army veterans who, through personal testimonies, seek to expose what they say is the reality of Israel’s military occupation of Palestinian territories. The photos she saw there, and the testimonies she read, shocked her so much that she started shaking and crying, she recalled. 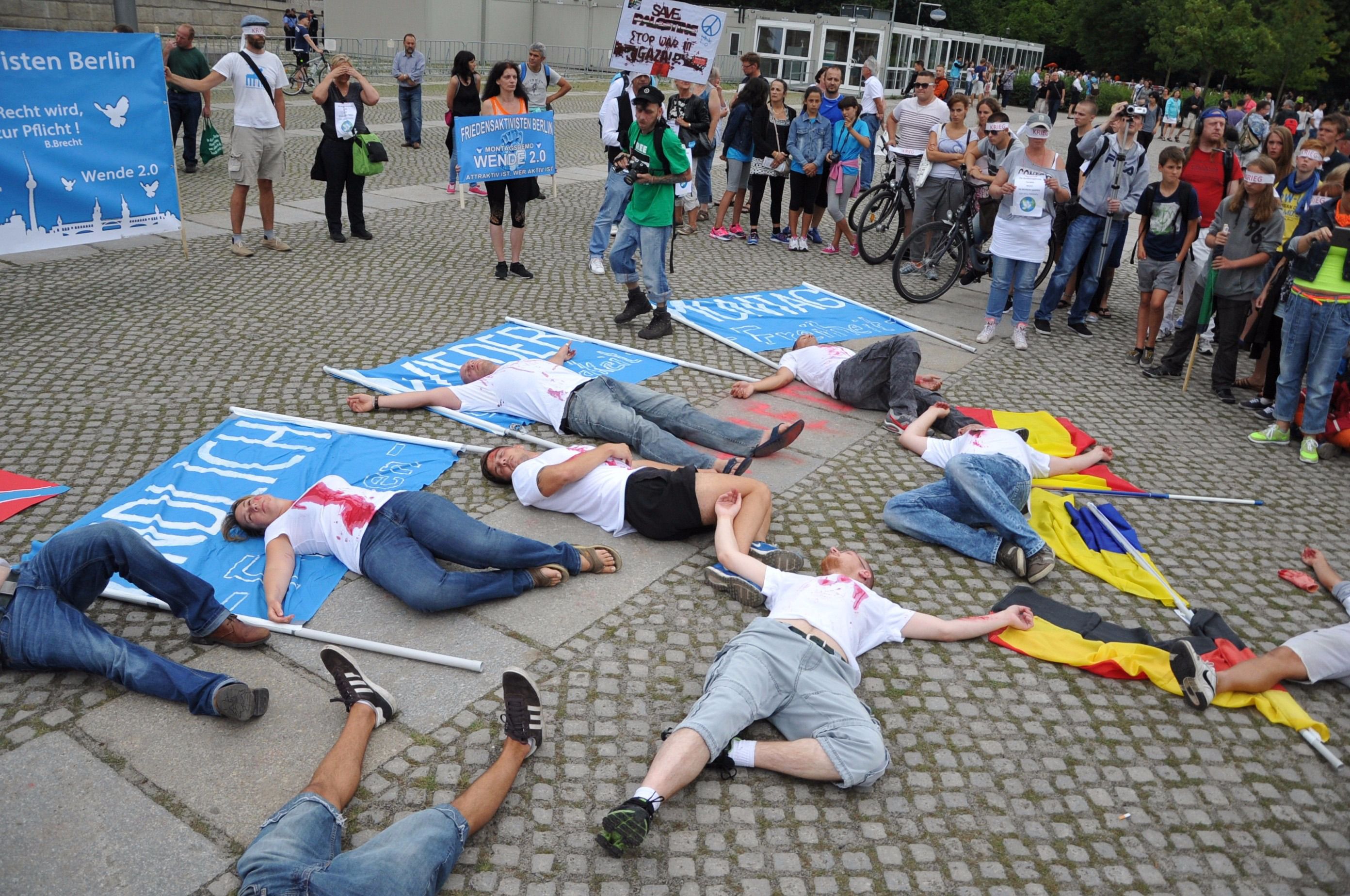 In the days that followed, Meyer researched online about the Israeli-Palestinian conflict, reading reports by human rights organizations like B’Tselem and Machsom Watch. But still, she felt uncomfortable talking with German friends about her growing criticism of Israel’s approach toward the Palestinians; she felt they would not understand her.

“Then, last year, there was this massacre in Gaza, and I could not keep this inside anymore,” Meyer told the Forward. “I wanted to speak out, I wanted to meet other people. I didn’t want to feel so isolated.”

Meyer joined protests against Israel’s military operation in Gaza last summer, and was involved with Berlin for Gaza, a committee that organized events in solidarity with Palestinians. Today she’s active in the boycott, divestment and sanctions movement against Israel, known as BDS, and regularly uses social media to criticize Israel’s actions and policies in the West Bank and Gaza.

But concerns about this growing criticism of Israeli policies are growing within the German left, alongside the criticism itself. For Feuerherdt, 45, leftists like Meyer, with their support for BDS, and charges that Israel massacred Palestinians in Gaza, go beyond the border of legitimate criticism.

“What makes me uncomfortable is when people say Israel is a criminal, that it commits war crimes,” Feuerherdt said. He believes that as a consequence of the Holocaust, he has a duty to support Israel as a homeland for the Jewish people.

Jan Lichtwitz, a Berlin resident who is active in the youth branch of the Social Democrats, a left-center party, sees the connection to Israel as part of the identity of German people. But unlike Feuerherdt, the 27-year-old Lichtwitz does not believe past events should stop him from being critical of the Jewish state in the present.

“I don’t feel there is a contradiction between feeling historical responsibility to Israel and criticizing Israel’s right-wing government,” Lichtwitz said. He cited Israel’s construction of exclusively Jewish settlements in the occupied West Bank as a wrong policy. But he added, “We, as left-wing, have very close partners in Israel that are not part of the government, and we stand with them.”

Lichtwitz firmly opposes the BDS movement because it delegitimizes the grassroots cooperation between Israel and Palestine, which he said is essential to building trust between the two peoples.

The BDS movement has struggled to gain supporters in Germany, in comparison with its relative success in the United Kingdom and other parts of Europe. This is because it is difficult for Germans to take a public position against Israel, according to Peter Ullrich, a sociologist at Technische Universität Berlin.

Ullrich, who has spent years researching anti-Semitism, anti-Zionism and criticism of Israel in Germany and other European societies, found that in the United Kingdom being left today clearly means being pro-Palestinian. But in Germany — even today — the fear of being labeled an anti-Semite is much stronger and looms over every debate or comment that relates to the Israeli-Palestinian conflict.

”There are situations in which you have to be aware that expressing criticism of Israel will kind of automatically result in accusations of anti-Semitism,” Ullrich said. “And what my research in the last couple of years shows is that there are really many instances where these accusations are justified, but there are many where it simply isn’t, where a political position that is legitimate or ambiguous towards Israel is automatically reduced to being an expression of anti-Semitism, and this makes people insecure.”

As a BDS activist, Meyer has been experiencing just that on Facebook. She said that when she posted photos from pro-Palestinian demonstrations in Berlin, or linked to articles criticizing Israel, some of her relatives and close friends tried to silence her.

“They said, ‘You are an anti-Semite!’ or, ‘Are you sure you want to say this?’ or, ‘This is very thin ice you are walking on; be careful what you say about Israel and about Jewish people’,” Meyer said. “It is a clash of narratives, and it is upsetting, especially when these people are close, are good friends, are people you really like.”

In commemoration of the desaster of May 8th 1945