Jews at Auschwitz by fire , by gas …

Is Angela Merkel going to endorse Elie Wiesel’s lies and, particularly, his lie of the extermination of the Jews at Auschwitz by fire and not by gas?

On Monday, April 24, 2017, Angela Merkel, Chancellor of the Federal Republic of Germany and former member of the Communist “Free German Youth” in the German Democratic Republic, will receive the Elie Wiesel Award from the US Holocaust Memorial Museum in Washington (see German Chancellor Merkel to Receive Museum’s 2017 Elie Wiesel Award, USHMM press release of March 23).

Elie Wiesel, who died last year, was the “prominent false witness” [1] who said he had been interned during the war at Auschwitz with his father. In January 1945, while the Soviet troops were approaching, the Germans had offered the internees, Jewish or non-Jewish, the choice between leaving for the West (i.e., towards the centre of “Nazi” Germany) and staying on in the camp. With the first choice, the prisoners would experience one of the dreadful “death marches” during which many of them might perish because, particularly, of the devastation caused by the Allied bombings and, with the second, they – especially the women and girls among them – could fear having to face the brutal rabble of the “Red Army”. Having deliberated at length, father and son opted for departure with the Germans, that is, with their supposed exterminators, instead of awaiting their supposed liberators on the spot.

E. Wiesel is often portrayed as the witness par excellence to the extermination of the Jews in Auschwitz, capital of “the Holocaust” or “Shoah”. In general, care is taken not to specify that, for the author of Night, the extermination was carried out there by FIRE in open-air flames and not by GAS in “gas chambers”. In 1994 Elie Wiesel, by now finding talk of extermination by GAS impossible to bear, went so far as to write in his memoirs: “Let the gas chambers remain closed to prying eyes, and to imagination” (English translation: All Rivers Run to the Sea, New York, Knopf, 1995, p. 74). Thus, for him there was no question of representing the weapon of the crime of crimes, or even of imagining it. That was also what, in the same year, those in charge at the Holocaust Memorial Museum in Washington decided, and particularly rabbi Michael Berenbaum, stating to me in his office, with four witnesses present, on August 30, 1994: “The decision has been made not to give any physical representation of the gas chambers”, and refusing to say any more about that decision.

The Soviets took Auschwitz on January 27, 1945. Curiously Pravda, for six days, stayed silent on the way in which the “German fascists” had gone about exterminating the detainees. Only in its issue of February 2 was it to reveal that the extermination had been carried out by ELECTRICITY; the victims, falling dead on a conveyor belt, were carried to the top of a blast furnace and dumped inside to be reduced to ashes (see Auschwitz: Facts and Legend, January 11, 1995). In other words, any rubbish that the men at Pravda (“truth”) saw fit to write, as so often with holocaustic inventions!

As for the Holocaust Memorial Museum of Washington, it has become, by dint of lies and tall tales of all kinds, a Mecca of the Religion, Business and Industry of the alleged extermination of the Jews [2]. In a general way, the sums of money collected for “compensation” or “reparations” since the Second World War by various Jewish organisations or Jewish eminences like Nahum Goldmann (1895-1982) are colossal. It would be interesting to do research to determine the exact amount, and make it known; for an idea of ​​it, one may refer to my brief article in French of May 23, 1978 on the politico-financial fallout of the Jews’ “genocide”; it includes a rather instructive extract of a press interview with said Goldmann.

Meanwhile, the ceremony on April 24 will illustrate, at the very least, the gathering on a single day of a whole fauna of illusion salesmen who have strived to kill the German soul by means of a gigantic slander that has become untouchable, sacrosanct; the same people, by blackmail, have subsequently extorted from the German and Austrian nations, and from others as well, fabulous sums of money, or “donations” of considerable value – such as, for example, free supply by the German taxpayer to the State of Israel of several especially costly submarines, all set to be armed with nuclear weaponry.

Rather than commemorations and ceremonies I am still waiting for “one proof, one single proof of the existence and functioning of a single Nazi gas chamber”, or a response to the challenge that I repeat persistently: “Show me or draw me a Nazi gas chamber!” I am answered with physical blows, insults and lawsuits, and even with a special law, known as the “Gayssot law” or “Fabius-Gayssot law” or “Faurisson law”. This law has the peculiarity of having been published in the Journal Officiel of the French Republic on July 14, 1990. For the average Frenchman the date of July 14 has taken on a symbolic value. It was on that day in 1789 that, supposedly, a tyranny came to an end and, at last, there opened an era that boded well for the freedom of opinion and expression. Hence, consequently, the “just” punishment of the researchers and historians who, for their misfortune, make discoveries that they ought not to have made.

PS: As irony would have it, on the same April 24 another German, to whom historical revisionism owes so much, will celebrate his 78th birthday: the admirable Ernst Zündel. 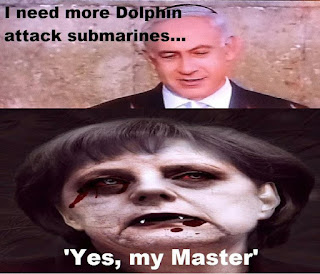 [2] See A Red-Letter Day for Revisionism, April 22, 1993 / The US Holocaust Memorial Museum: A Challenge (May 2, 1993), as well my article in French, Mémoire en défense contre ceux qui persistent à m’accuser de falsifier l’Histoire alors que les tribunaux refusent depuis toujours de confirmer cette accusation et que les historiens hostiles au révisionnisme multiplient les concessions à mon égard + Note du 7 octobre 2016 (September 26, 2016). In the latter piece I remind the reader that the German version of Night, i.e. Die Nacht zu begraben, Elisha, is tarnished with a falsification repeated fifteen times. In fifteen places in the book the translator, in fact, has put gas where the author had put none. This being the case, it may well be that the German Chancellor has read only a seriously falsified version of Elie Wiesel’s “testimony” and believes, still today, that he was really “a witness of the gassing of Jews at Auschwitz”.

Why 189,000 Soviet Jews fled to Italy rather than the Promised Land