VIENNA — Austria’s far-right Freedom Party raised eyebrows in parliament on Thursday by ditching its usual blue cornflowers, a symbol associated by many with Nazism despite the party’s strenuous denials.

The anti-immigration party’s 51 MPs instead sported an edelweiss, a white-and-yellow Alpine flower, on their lapels at the opening session of parliament following last month’s elections.

The edelweiss stands for “courage, bravery and love,” FPOe leader Heinz-Christian Strache, who is set to become deputy premier in a likely coalition currently being negotiated with the conservatives, said on Wednesday. 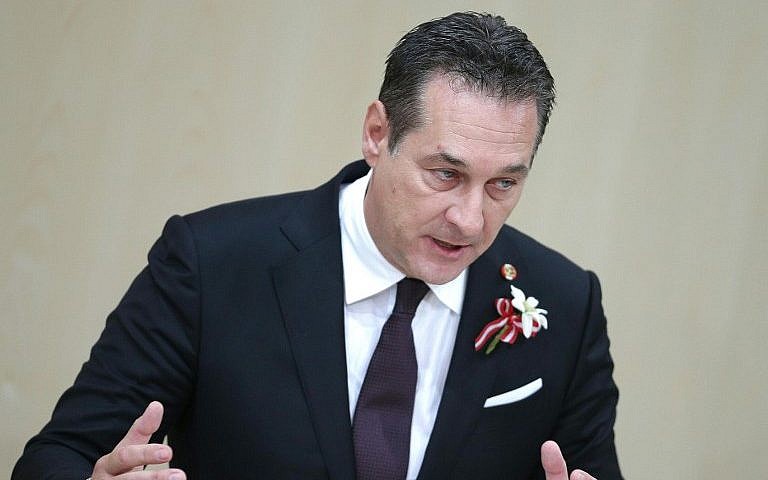 Heinz-Christian Strache, leader of Austria’s far-Freedom Party, speaks during the first session of the national assembly since elections, on November 9, 2017, in Vienna. (AFP Photo/APA/Georg Hochmuth)

Traditionally, like when parliament last opened after elections in 2013, FPOe lawmakers have worn cornflowers, which matches the party’s colors and which it said symbolises the ideals of the 1848 liberal revolutions in Europe.

However, critics say that the cornflower is better known from being worn by Austrian Nazis as a secret way of recognizing each other when they were banned in the 1930s, before Adolf Hitler annexed his native country in 1938.

The nationalist FPOe was created by former Nazis in the 1950s and its first head was a former member of the SS. Strache also flirted with neo-Nazism in his youth, although he now says he rejects all extremism and racism.

‘A symbol of Austria’

Observers said that the FPOe’s decision to abandon the cornflower is a further attempt to soften its image as it prepares to enter government as junior partners to incoming chancellor Sebastian Kurz, 31, of the center-right.

“The cornflower played a certain role, also in the early day of the Nazi-era. The edelweiss, instead, is a symbol of Austria, as opposed to the cornflower,” political analyst Thomas Hofer told AFP.

The edelweiss is also famous — albeit only outside Austria — as a song in the 1965 hit musical film “The Sound of Music” starring Julie Andrews about the von Trapp family’s escape from Nazis in World War II. 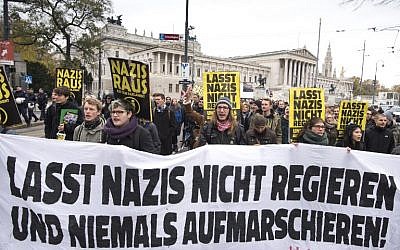 Anti-fascist protesters demonstrate outside the Austrian parliament against the far-right Freedom Party on November 9, 2017, in Vienna. (AFP Photo/Joe Klamar)

The last time the FPOe entered government, in 2000 under controversial then-leader Joerg Haider, there were major demonstrations and Austria was ostracized within the European Union for a time.

This time, however, the reaction is likely to be considerably more muted, with the FPOe having toned down its rhetoric and Europe now much more inured to nationalist and populist parties.

On Thursday only around 200 anti-fascist protesters staged a demonstration in central Vienna carrying placards such as “Don’t let Nazis govern” and “Fascism wears many colors.”

Israel’s Lobby will have to register under Brandis’s law