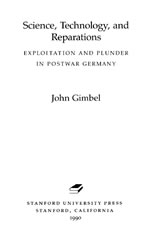 Preface. In doing the research for this book I discovered that most reasonably informed people know something about Werner von Braun and the team of German rocket scientists and engineers whom the Americans brought to the United States under Project Paperclip after the Second World War. Most of them also know about the race for German scientists that occurred at the time, a competition that perhaps explains the widespread currency of a quip, following the successful Russian launch of Sputnik in October 1957, that their Germans were better than our Germans. What virtually no one seems to know, however, is that Project Paperclip was but one aspect of a much more comprehensive and systematic ”intellectual reparations” program to exploit German scientific and technical know-how, not only for military purposes but also for the benefit of American science and industry. That broader program, and the way in which Project Paperclip dovetailed into it, is the subject of this book. I am myself unsure when I became aware of the broader program, but I do know that it did not happen during my immediate postwar service as translator and interpreter for the military government detachment in Friedberg, Hessen. Neither did it occur during my research in the 1950’s on the impact of the American occupation on the town and county of Marburg. Gradually, but only gradually, during the 1960’s and 1970’s – when I continued my research on the American occupation of Germany and on the German problem and the origins of the Marshall Plan – did I come to realize that there was a story here, and that it was worth telling. …